2. paint/dispersion/coating, based on protic or organic solvents

3. paint/dispersion/coating material which realizes the reflection of electromagnetic waves from 9 kHz to 100 GHz.

4. paint/dispersion/coating material which realizes the conductivity of low-frequency currents/fields – and the derivation of such.

5. painting/dispersion/coating material which by means of graphene bridges (elongated flat cluster chains of graphene) within the emulsion/dispersion itself result in an effective surface (functional surface), wherein the effective surface (functional surface) is that surface – which is capable of being electrically conductive, electrically capacitive (storing electrical charge) – is meant. The effective areas (functional areas) created by graphene bridges thus supplement the effective areas (functional areas) of the metallic particles and/or carbon particles and/or carbon fibres – and thus improve the electrical charge storage. 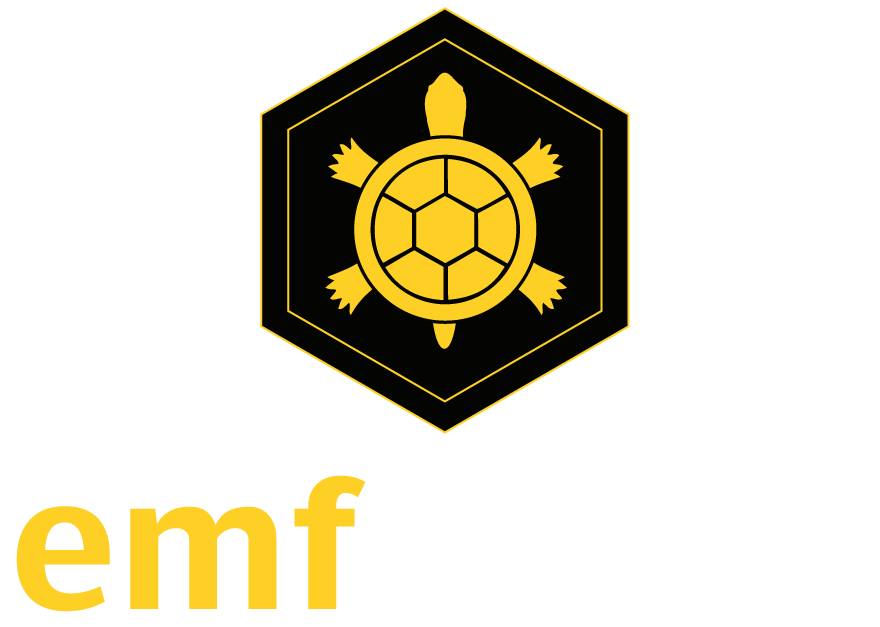 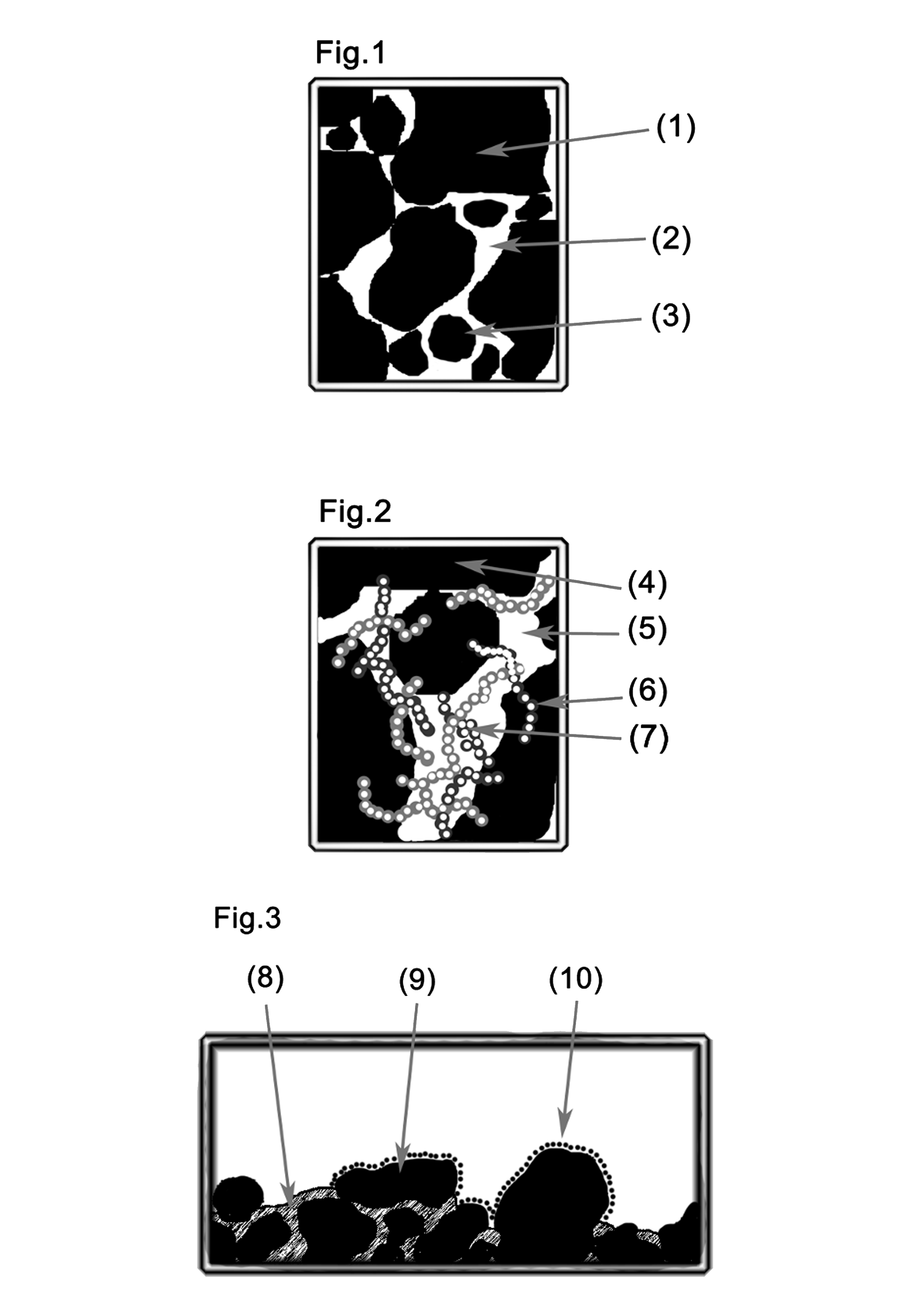 Fig. 1 shows a magnified and simplified diagram from above – (top view) of particles and their interspace in a simple binder emulsion/dispersion.
(1) shows a particle of metallic particles and/or carbon particles.
(2) shows the particle interstices with binder.
(3) shows a single (separate) particle without contact to other particles.

Fig. 3 shows an enlarged simplified representation of the cross-section of particles and their interstices in a simple binder emulsion/dispersion.
(8) shows the particle gap with binder without graphene bridge.
(9) shows a particle consisting of metallic particles and/or carbon particles –
which stands out from the binder emulsion/dispersion.
(10) shows as a dotted line the enlarged area due to the uneven surface profile.

Background: Electrically conductive and electrically capacitive as well as high-frequency radiation reflecting paints and/or coatings are nowadays used in industry for the manufacture of capacitors and/or accumulators and in building biology for the manufacture of paints for the shielding/reflection of high-frequency electromagnetic radiation (electrosmog) and the derivation of low-frequency electric fields/currents. The main materials used are dispersions based on protic or organic solvents with the addition of metallic particles and/or carbon particles and/or carbon fibres with a size from 1 μm to 500 μm (see Fig.1 (1)), and a binder such as acrylate/acrylic resin such as styrene acrylate, pure acrylate or polyvinyl acetate (PVAC), in order to obtain an electrically conductive and/or electrically capacitive (electrical charge storing) and/or high-frequency radiation reflecting coating. A coating produced with such a dispersion has an apparently smooth surface – however, on closer inspection under a microscope, the characteristically uneven texture (see Fig. 3) – which leads to an increase in surface area – can be clearly seen. Under a microscope, the individual particles and/or carbon fibres can also be clearly seen (see Fig. 3), which extends / enlarges the total surface of the coating (by excelling as a raised structure of the surface) by the outstanding area (see Fig.3 (10)). It also becomes clear that there are gaps between the particles and/or carbon fibres – even at high densities – in which only the binder used is found (see Fig.1 (2)). It also becomes clear that individual particles – which have no contact to other particles – may also be found on the coating (see Fig.1 (3)). Since there is now no material in these particle spaces which has the desired properties such as: electrically conductive, electrically capacitive and/or reflecting high-frequency radiation, these locations or particle spaces (see Fig.1 (2)) are rather suboptimal. Neither transport nor storage of charged particles nor reflection of high-frequency electromagnetic radiation can take place at these locations or particle spaces. In practice, this problem is currently satisfactorily compensated by several layers and/or by a saturated (fat) dispersion with more and/or additional smaller particles/particles per square micrometer (μm2). However, this compromise has the disadvantage that in the case of a largely saturated dispersion the binding capacity of the dispersion decreases and/or in the case of several layers a second – or a third – additional work step (production step) as well as approximately double – or approximately three times the amount of dispersion is required – whereby also between this first and second – or third layer – again particle interstices (see Fig.1 (2))with exclusively binder polymers are formed.

Solution: The task is solved by generating graph bridges from graphs (see Fig.2 (6),(7)). Graphene is a pure carbon product whose structure consists of a single atomic layer of carbon. There are graphene surface single crystals within the graphene surfaces with approx. 1020 GPa (a GPa are one billion PA A Pascal (Pa) is the derived SI unit for pressure, stress, modulus of elasticity and breaking strength) is extremely stable and is ideal for the transport and/or storage of charged particles. In the dispersion described above, graphene is incorporated into an emulsion and/or dispersion of a binder – such as acrylate/acrylic resin like styrene acrylate, pure acrylate or polyvinyl acetate (PVAC) – and an organic solvent like water. Due to the particularly high tensile strength of the graphene used of up to 1.25×1011 N/mm2 (Newtons per square millimeter), strands (or elongated flat cluster chains (see Fig.2)) are not used. (6)) of about 0.3µm-5µm length and 0.1µm to 1µm width and a thickness of 1nm to 50nm are made from graphene which forms a graphene chain mesh (see Fig.2 (7)) within the emulsion/dispersion binder which extends throughout the emulsion/dispersion binder. This binder emulsion/dispersion now replaces the binder normally used in the manufacture of shielding paints/coating materials and electrically conductive and capacitive (electrical charge storage) and high frequency radiation reflecting paints/coatings and/or emulsions consisting exclusively of simple polymers.

The resulting braid (see fig.2 (7)) (graphene network) thus forms electrically conductive bridges (see Fig. 2 (6),(7)) – between the carbon particles and/or carbon fibers added later – within the binder emulsion/dispersion electrically capacitive bridges (which store electrical charge), which also reflect high-frequency radiation. Due to the low electrical resistance of graphene – which is on average 31Ω-m (ohmmeter) – these bridges (graphene bridges) are particularly suitable for realizing the desired properties of the binder emulsion/dispersion.